A Night Out in Paris: Biking The Left Bank

The south side of the Seine is noticeably smaller in area than the 14 arrondissements that make up its northern Right Bank. Even so, trying to bike your way around a night on the town will require a little direction and know how if you want to get the most out of the experience. Thankfully, with smaller selection comes less to learn, so getting your bearings straight isn’t too demanding a task.

In order to help you out on your journey, Spinlister has put together a quick list of some of the best streets and districts the Left Bank has to offer when it comes to eating, drinking and socializing. Once you’ve gotten a lay of the land, be sure to check out our planned bike route that will show you the most efficient way to pack them all into a memorable night’s ride.

La Butte aux Cailles is without a doubt one of Paris’ most unique neighborhoods. With its small houses and front lawns, wide sidewalks and quaint cobblestone streets, you’re more likely to feel yourself strolling through a countryside village than the largest city in France. Well, at least during the daylight hours. By nightfall, the area comes alive with activity as young, salaried locals from across the 13th arrondissement descend on Rue de la Butte aux Cailles to partake in its wealth of cool, quirky bars and down home, no-reservations restaurants. Hop into staples like Le Sputnik and La Folie en Tête to bask in unique decor and truly fantastic atmospheres, or on nice nights head slightly north to Rue des Cinq Diamants and grab a seat at the fantastic terrace outside La Butte aux Piafs. This is convivial Parisian partying at its finest. 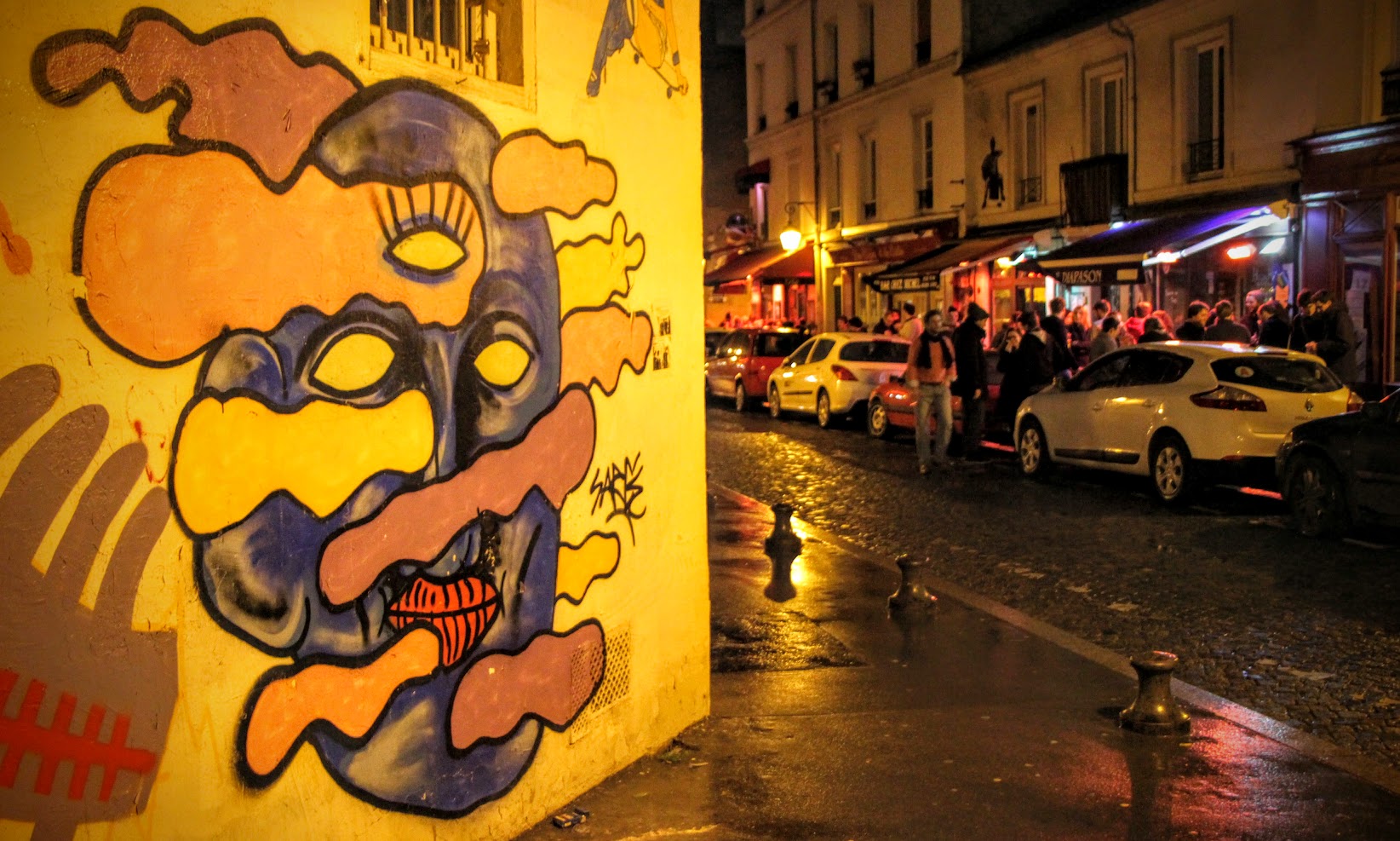 It turns out that the area surrounding Paris’ most despised high rise happens to be home to several of the best crêperies in the city. Why is this, you ask? Well, the history is pretty straightforward: crêpes originated in the northwestern region of Brittany, which is connected to the French capital by way of the train lines arriving at Gare Montparnasse. Thus, as you can imagine, the surrounding neighborhoods are ripe with Bretons, bringing all their culinary traditions in tow. Nowhere is this fact more apparent than the celebrated Rue du Montparnasse just east of the tower. Crammed into less than 200 meters you’ll find about 10 restaurants serving up traditional, delicious French pancakes with all the fixin’s. If you don’t mind the queue, treat yourself to a meal at the famed Crêperie de Josselin and enjoy a taste of the good life, Brittany-style. 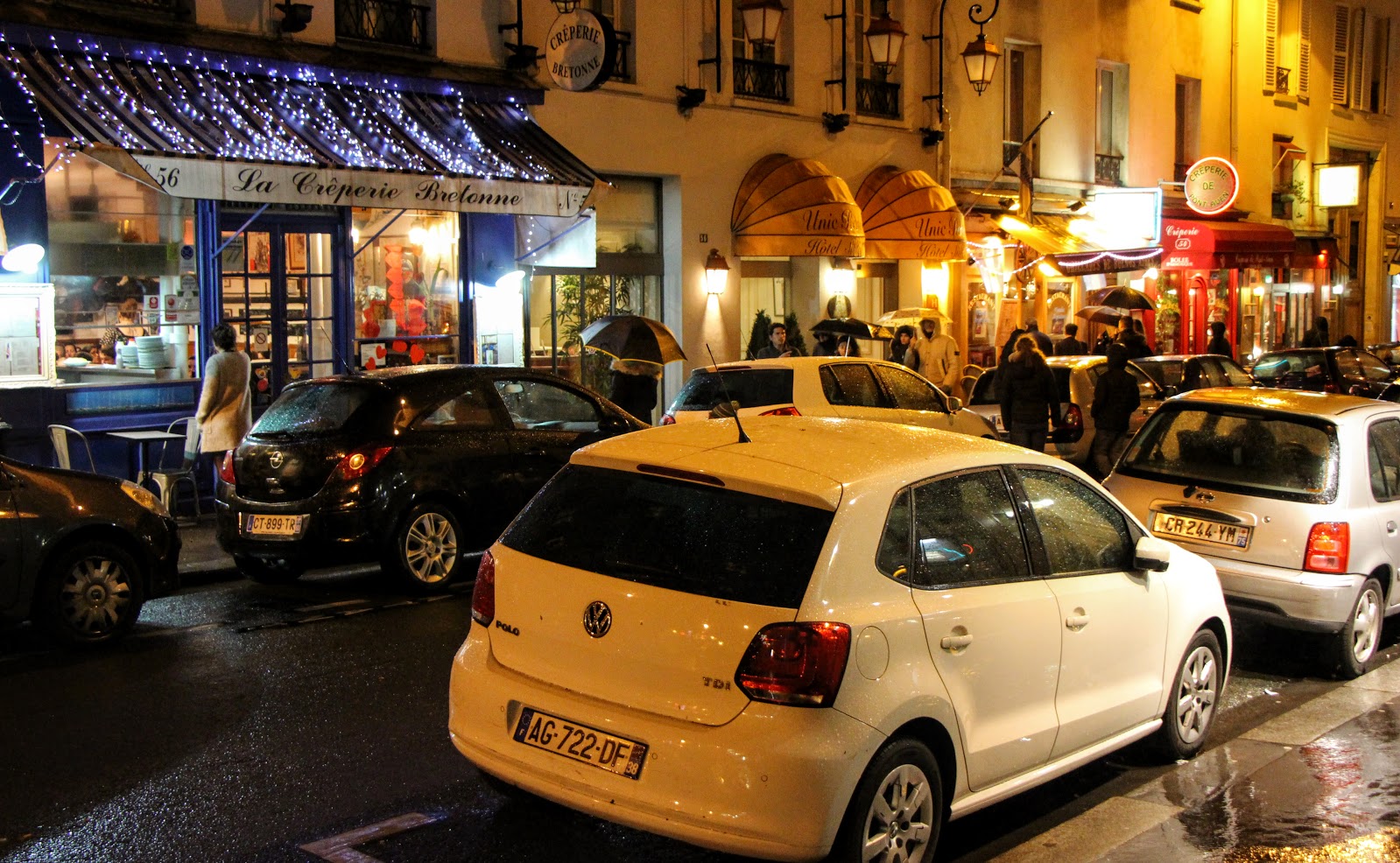 Le Quartier Latin is the oldest neighborhood in Paris, housing academic institutions like the Sorbonne alongside incredible works of architecture like the Panthéon. Put those together and you get a veritable melting pot of students and tourists, two groups known as much for their formidable appetites as for their inclination towards a bargain. That’s where Rue de la Huchette comes in. Situated just across the Seine from Notre Dame, think of it as the Left Bank’s version of Rue Saint Denis, packing a healthy amount of bars and restaurants together in a tight stretch of cobblestone real estate that measures just over 150 m in length. What the street lacks in unique personality it certainly makes up for in energy, so if all you’re looking for a lively, youthful atmosphere to help fill your belly and your bladder without draining your wallet, consider it found. Just don’t mind the baby faces. 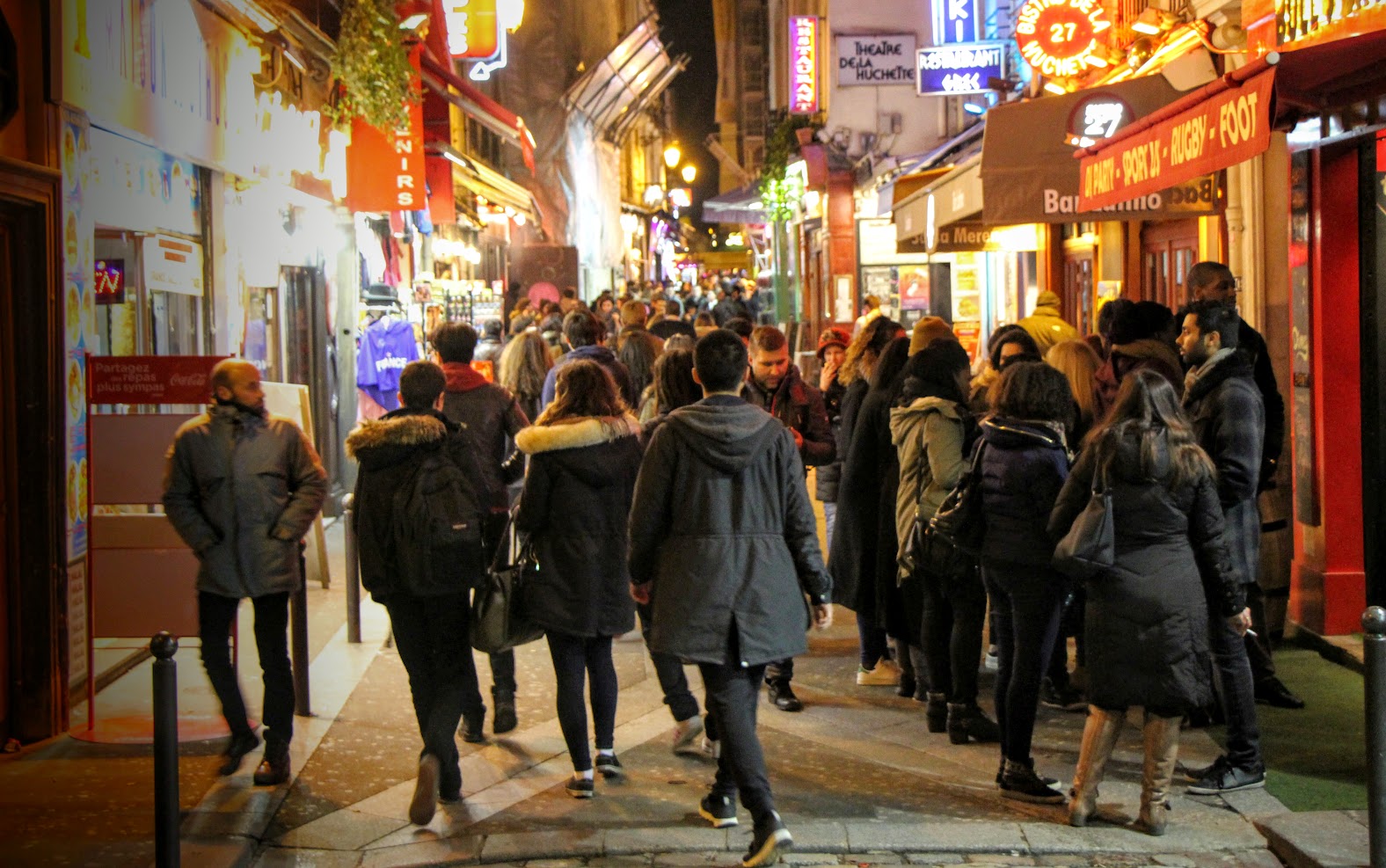 In the southern, less tourist-frequented end of the Latin Quarter you’ll find Rue Mouffetard, described by Ernest Hemingway as “that wonderful narrow crowded market street which led into the Place Contrescarpe.” This is, in fact, still an apt description of Rue Mouffetard, as its bustling street market still runs daily Tuesday through Sunday mornings and, indeed, it still spans the distance between Contrescarpe Square to the north and Square Saint-Médard to the south. But it’s not just the market that’s worthy of your attention. Once the sun sets and the stalls have closed up, there are a series of cozy bars and cafes nestled under outstretched awnings that draw a healthy dose of local foot traffic come the end of the work week. Not nearly as frenetic as a Rue de Lappe, this is your ideal go-to for an energetic but not over-the-top night out. 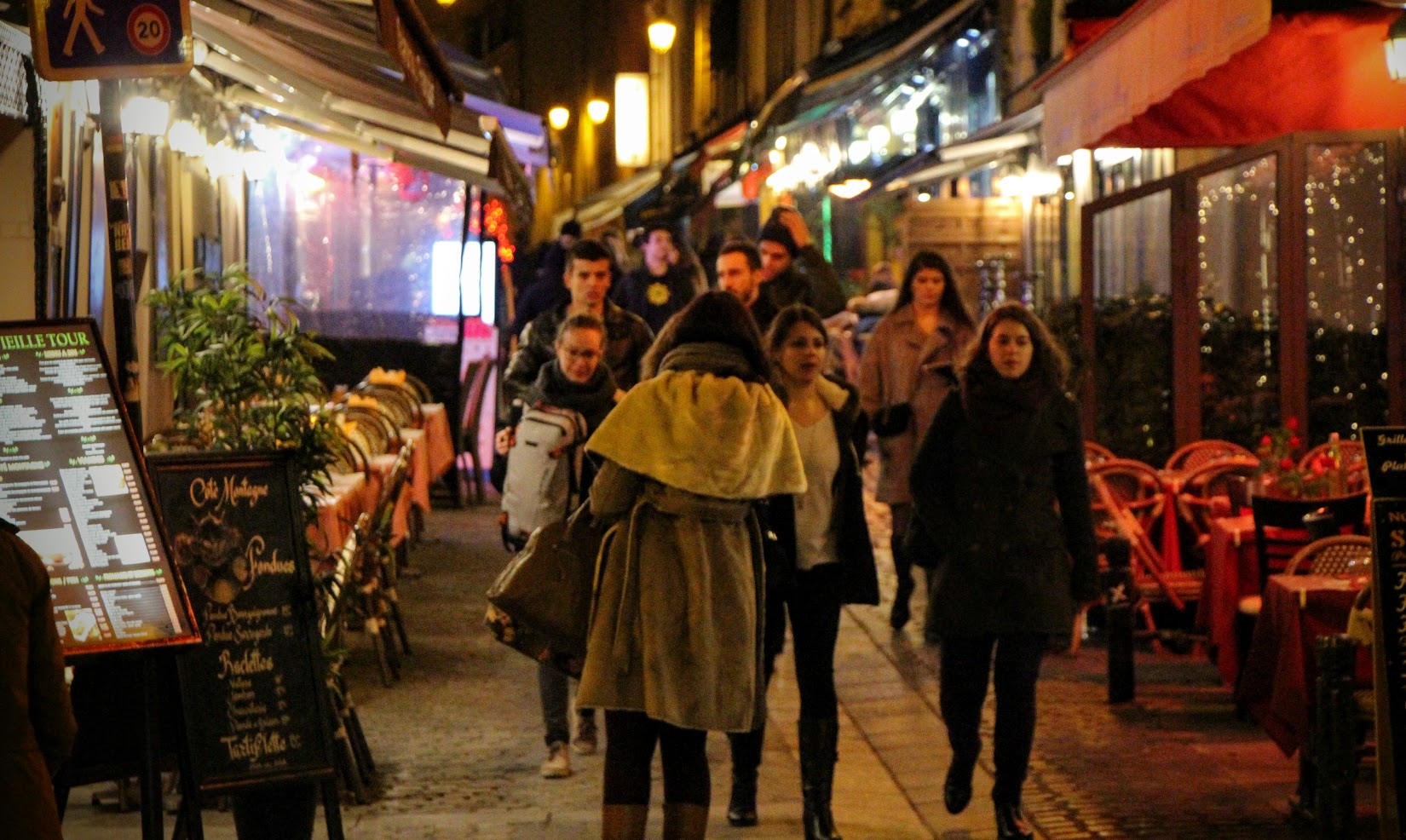